Welcome to Down On The Street, where we admire old vehicles found parked on the streets of the Island That Rust Forgot: Alameda, California. It appears that every R107 ever built is still alive today. 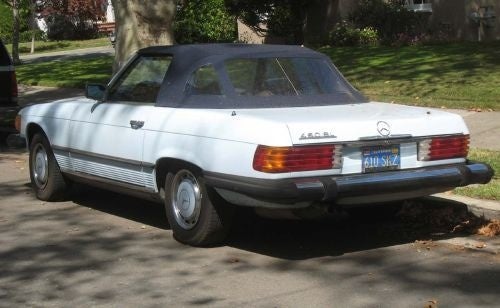 That's not really true, because I find them in junkyards with depressing regularity, but Alameda still has plenty of nice examples. I thought I'd go shoot this one in the neighborhood in which I grew up.

I could probably find a dozen of these things on the island in one afternoon, if that ever seemed necessary, and most of them would be in pretty good shape. In 1977, your new 450SL came with a 180-horsepower 4.5 liter V8- exactly the same power as the '77 Corvette's 350. The Benz weighed 3,670 pounds versus the Corvette's 3,448 pounds and cost $21,943 (about 78 grand in 2009 dollars) against the Vette's $8,648 ($30K today). I'm going to go out on a limb and say that the Mercedes-Benz probably had the edge in the build quality and technical sophistication departments, but would you rather have had two Corvettes (with bonus Camaro) or one R107 back then?


Of course, no discussion of a 1977 Mercedes-Benz 450SL is complete without watching Marshal Lucky blow it to kingdom come! Yessir!